Now there is an easy way to integrate chat in your iOS Application. The Chatkit SDK by Pusher is a powerful tool which allows us as developers to easily build multiple chat features and enrich our application. Follow this step by step tutorial for effortless integration and use of the iOS Chatkit SDK.

The iOS application represents a use case in e-commerce, a ticketing system and the integration of a support chat component.

Here is a demo of what we will build:

For building and running the iOS Application you will need Xcode installed (in this tutorial 10.1 version is used) . You can install it from the link above. If you need to install CocoaPods , run the following command in your console:

After the initial setup is done, the next step is cloning the project from the following link .

In this tutorial we will focus on building out the support chat component. The code for the ticketing component is included in the repository and not covered in this tutorial.

There are two ways to start working with Chatkit and use the SDK in our application, the first one is through CocoaPods, which is a dependency manager for cocoa projects, while the second one is through Carthage, which is decentralized dependency manager. For more details you can checkout the following link. In this project CocoaPods is used. In the project’s folder podfile you will find the current configuration, where chatkit is configured as pod.

The current Podfile, which can be found in the project folder:

Whenever you create new iOS project and you were to integrate pods it is necessary to run the following command:

This would fetch and install the pods specified in the podfile and create your .xcworkspace which integrates the pods and the main project. Use this for further development. Open the workspace in Xcode. 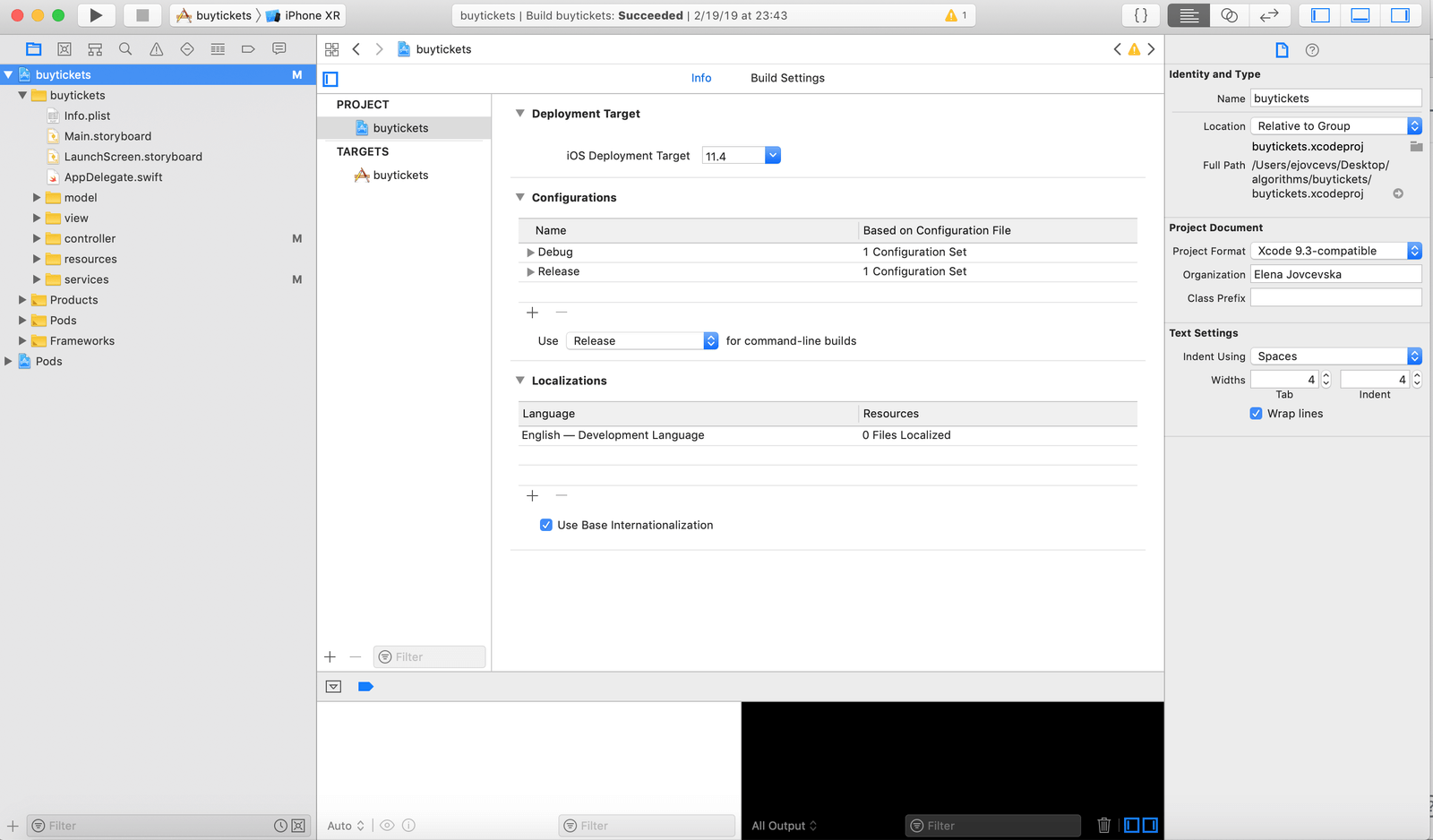 Your window should look like one above. The project classes are separated in five groups:

You can take a look in the groups and get to know the code or run the application before continuing with the tutorial. I will go more into details of the support chat component’s implementation.

There is one more step that we did before using the Chatkit SDK in code. And you would need to do if you were to implement Chatkit in your iOS Application. Sign up to the following link , for using the Chatkit services and creating instance which will be later one used in your application.

The first step is to select the option to create instance. 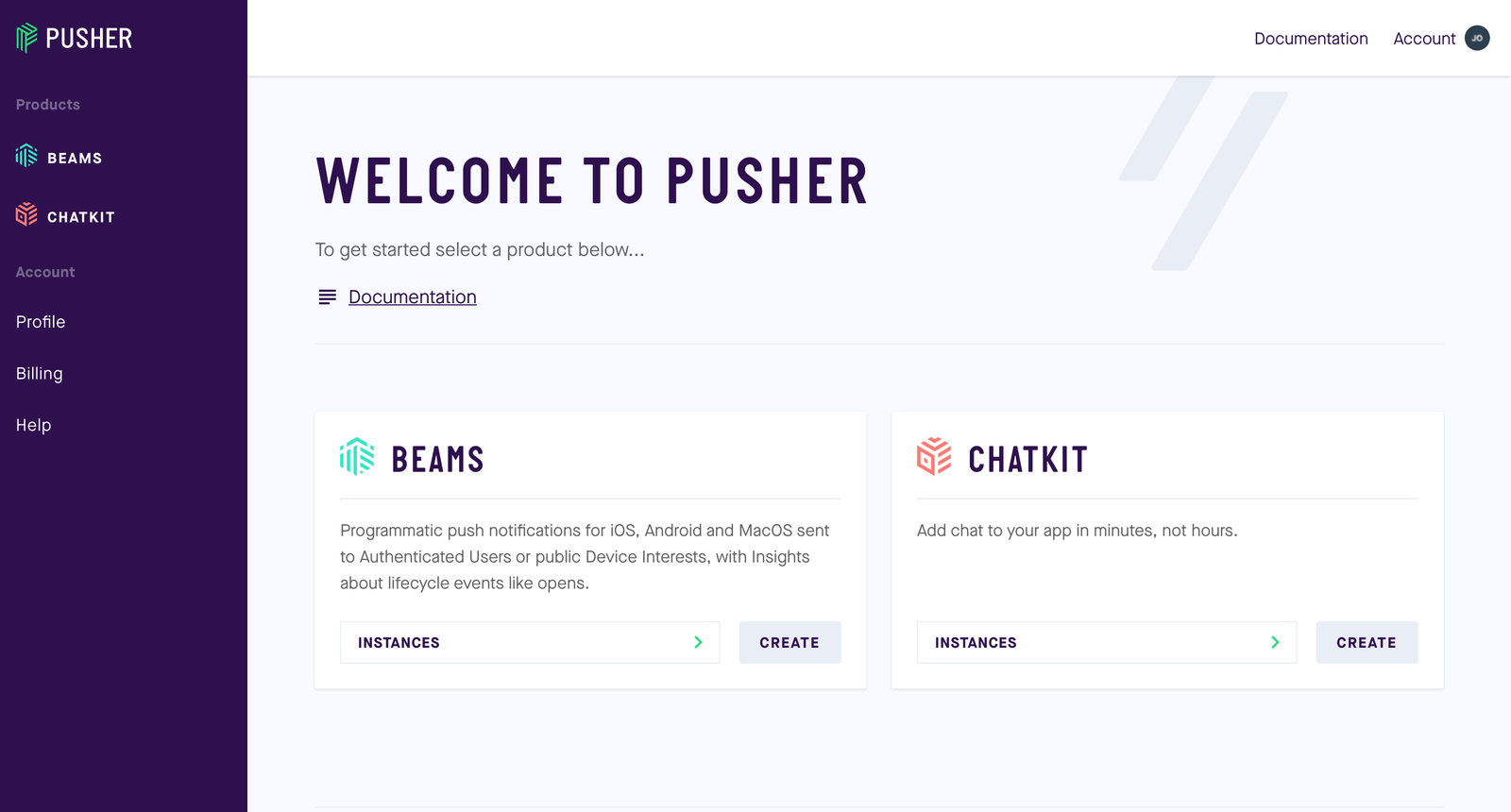 The instance’s name that was created is the same as the name of this sample project, buyTickets. 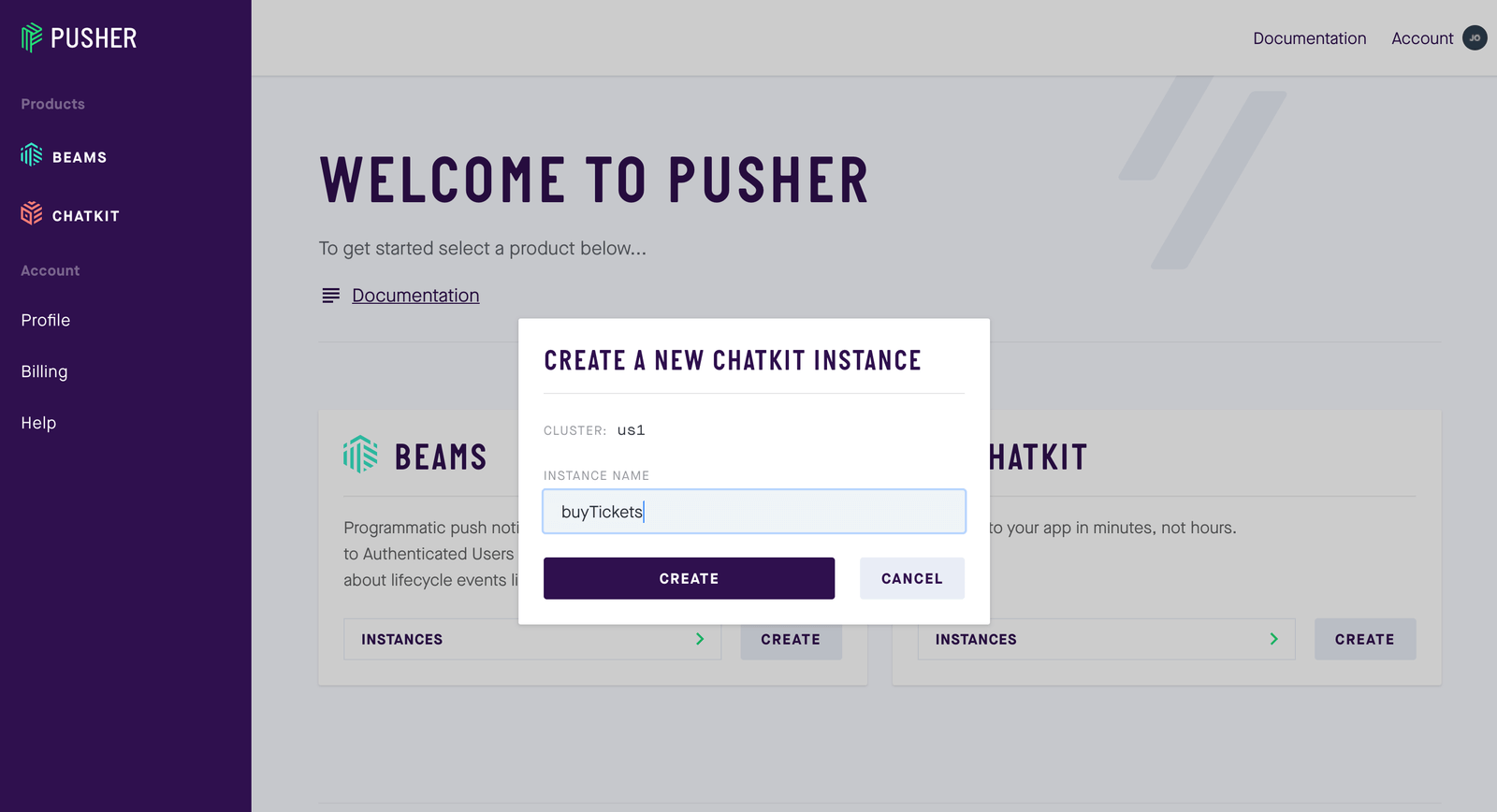 Now that the instance is created you will get an overview of the instance locator and test token provider, which you can see further in the tutorial that are used in the iOS Application, to use this SDK. 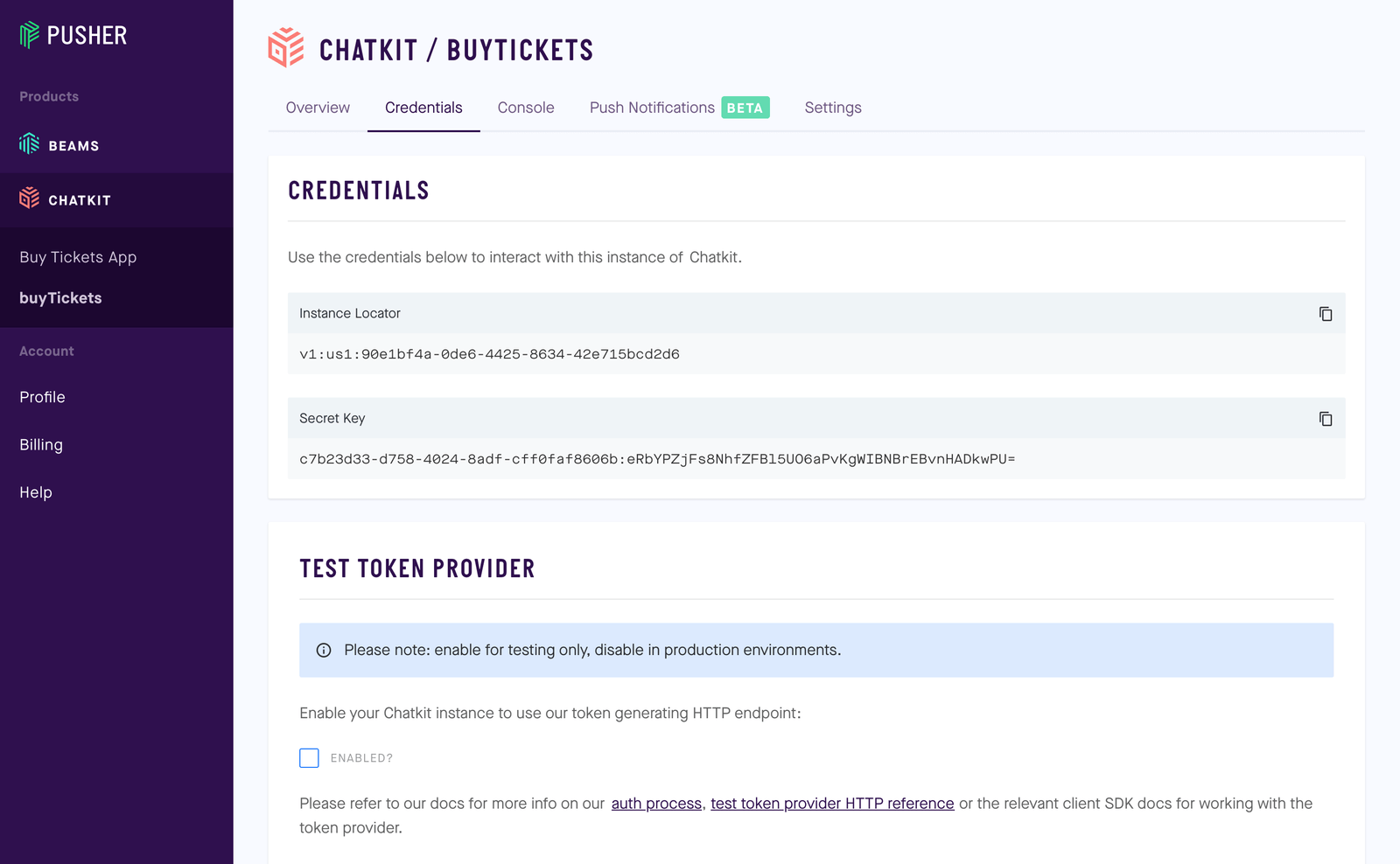 The second step is performed in the Console tab. Here you will be presented with the option to create user. 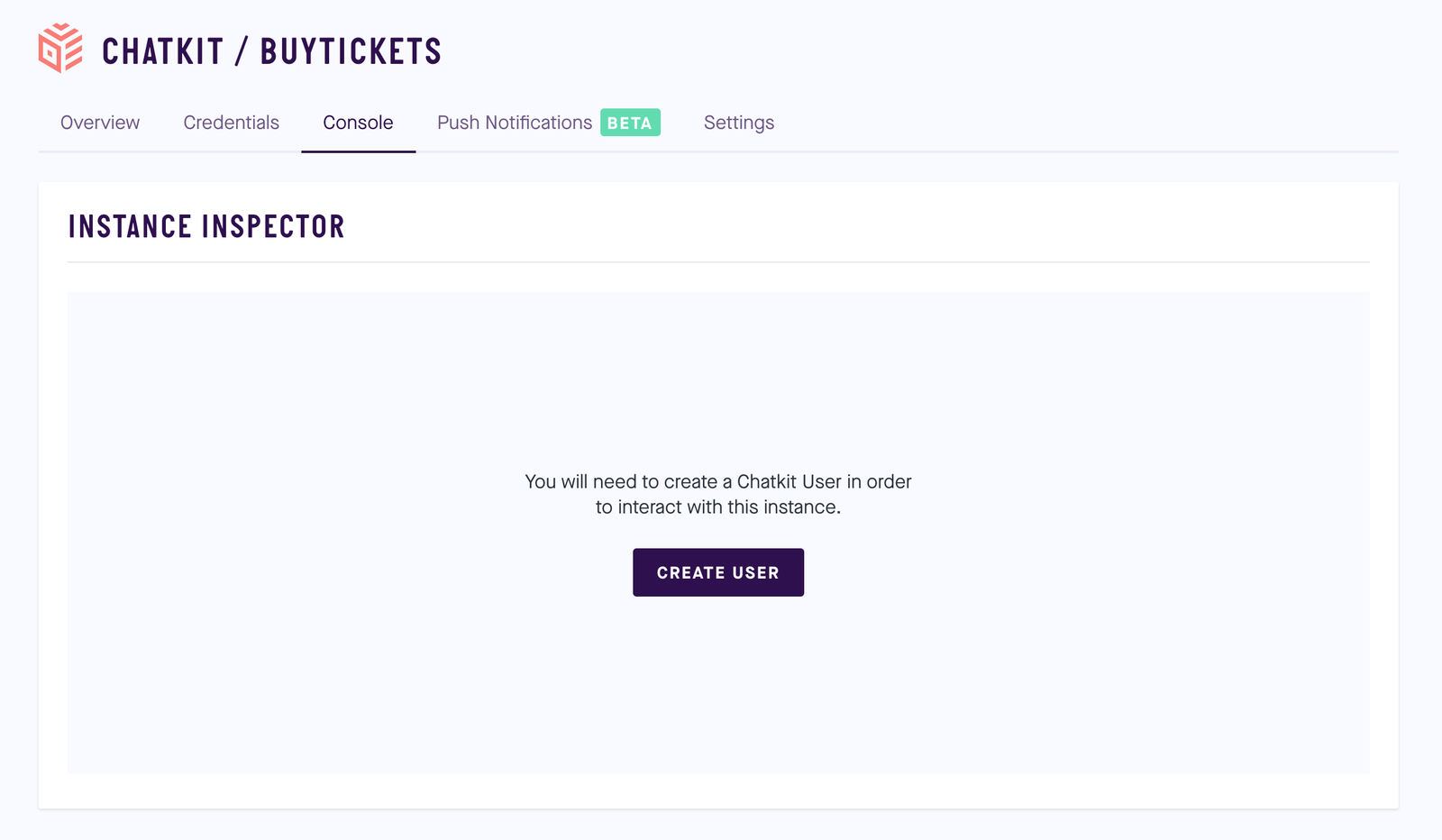 The first users that were created for the purpose of this tutorial are Agent and Customer. The process of creating the user is very simple. 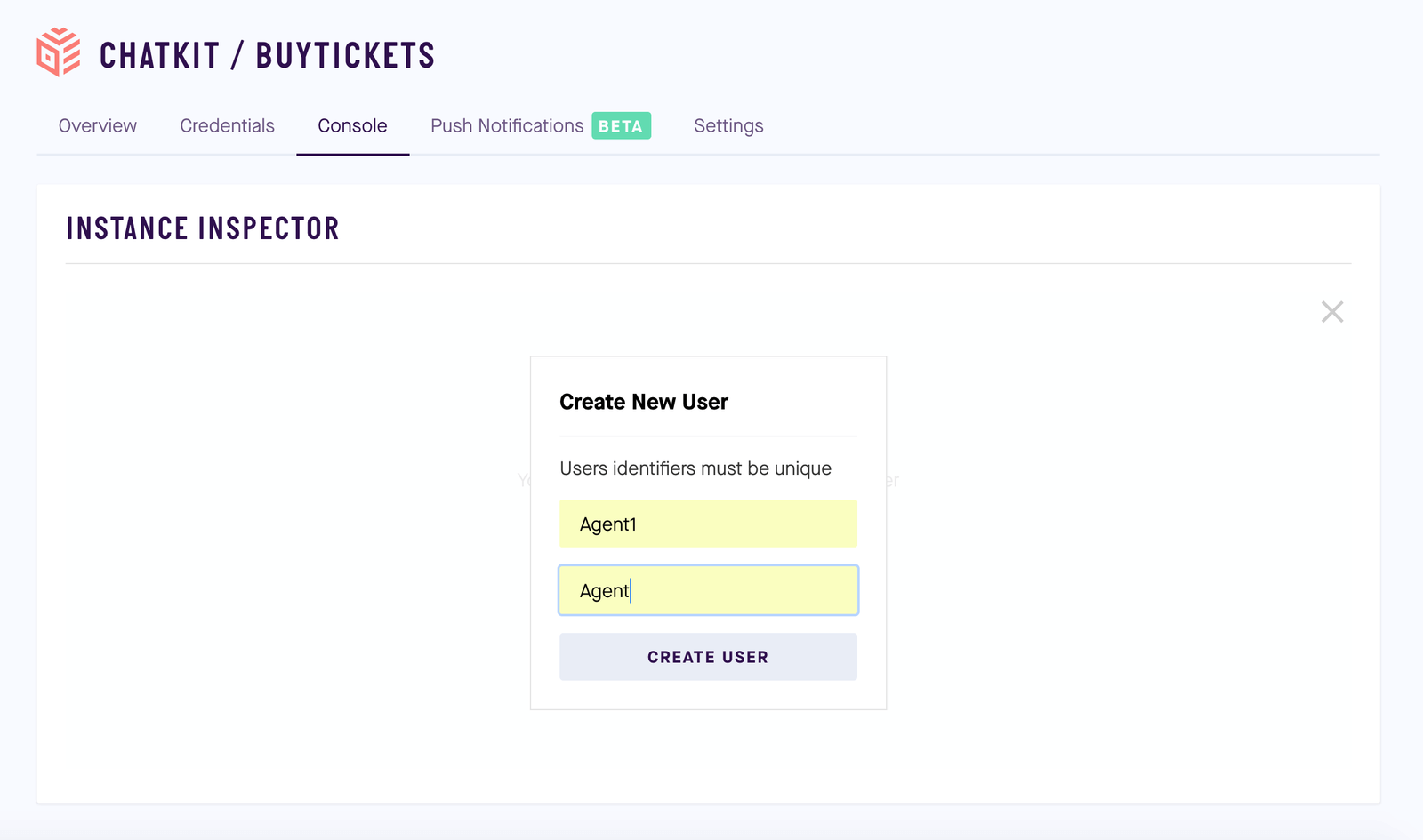 The console tab now offers more options, such as creating a room for the existing users. 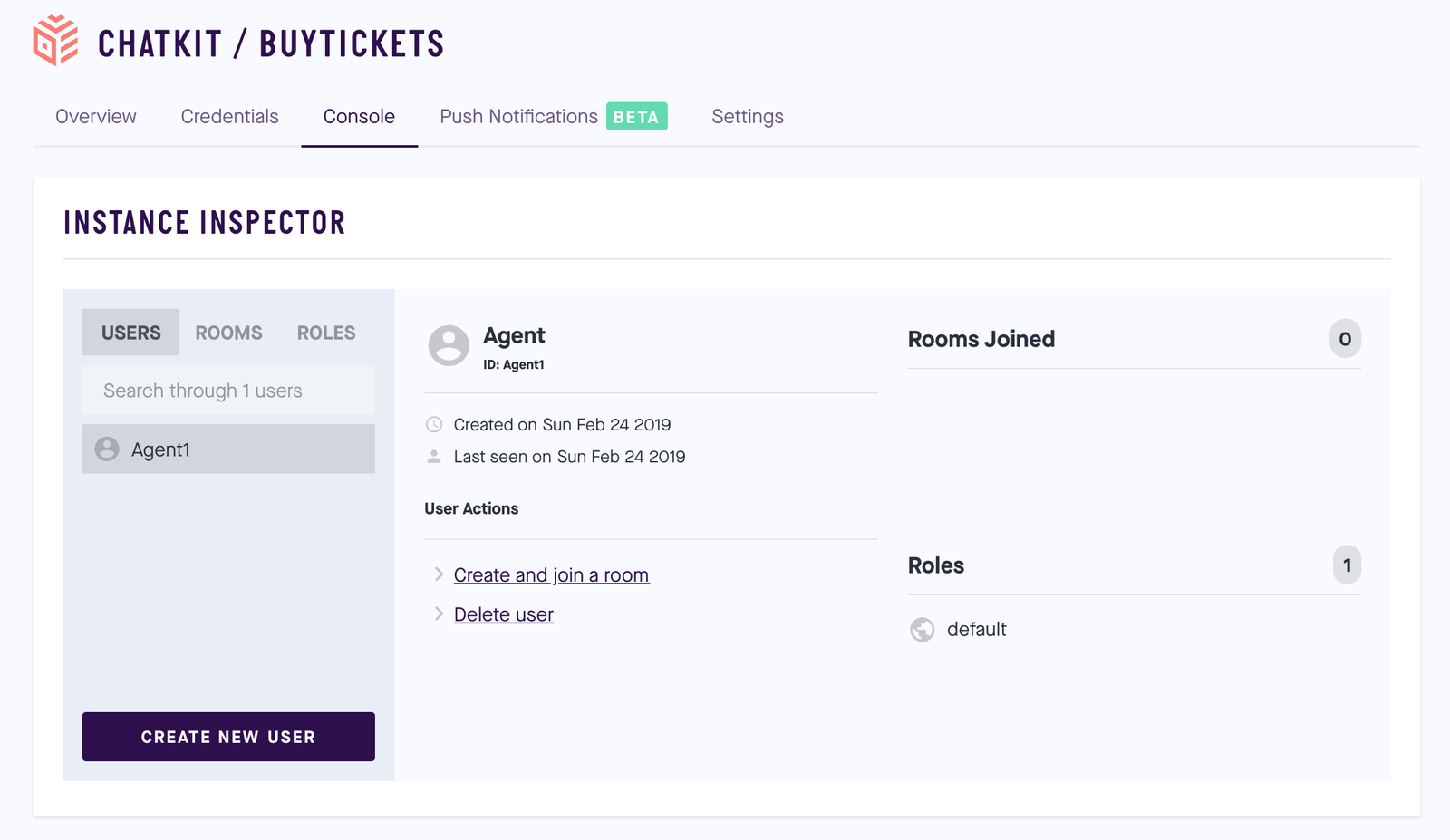 The third step is creating a room for the user you created. The room can be private or public, which is easily managed at this step. 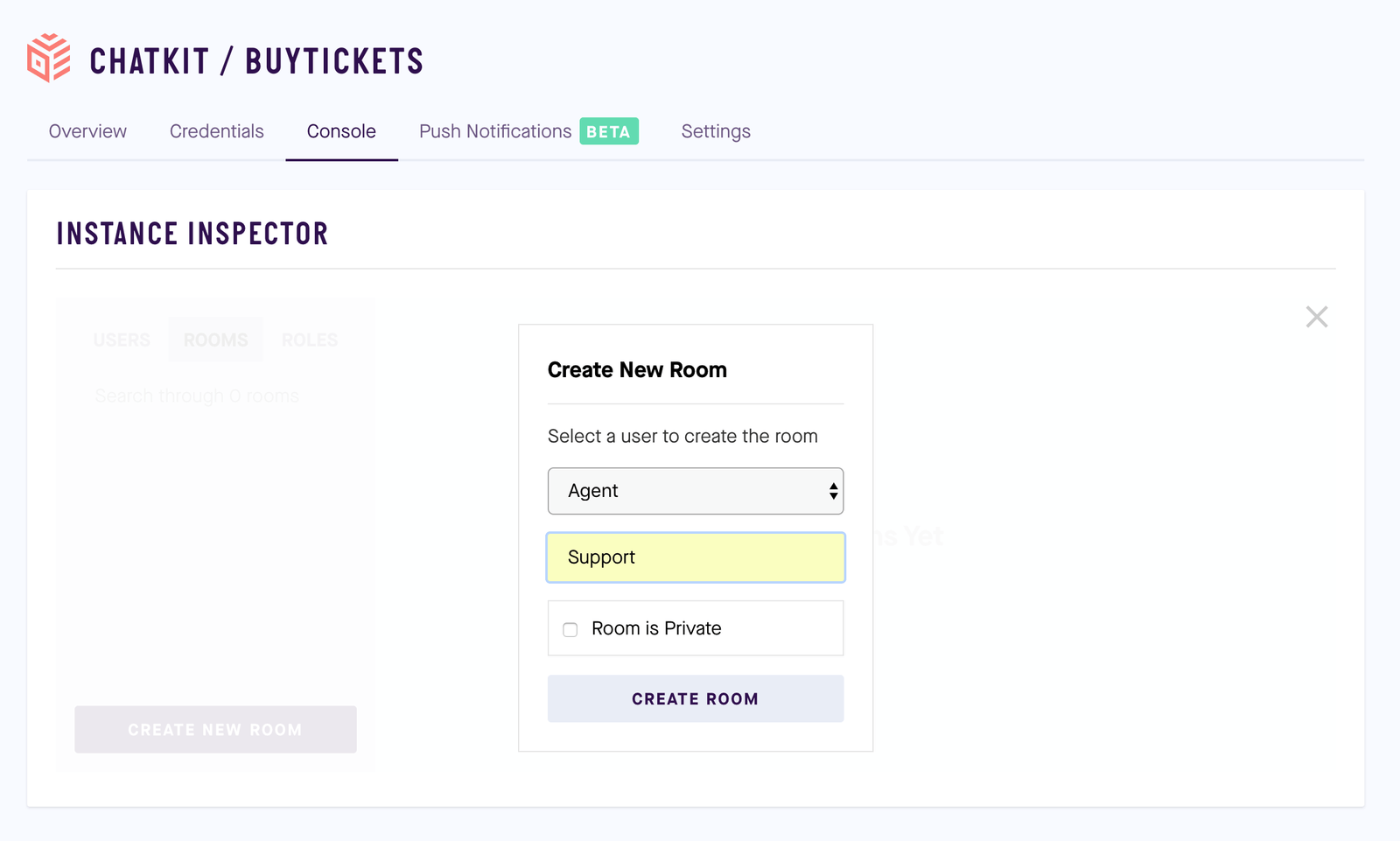 The console again is updated with the rooms overview, such as messages sent in the room, members and options to add new users, members or to delete the room. 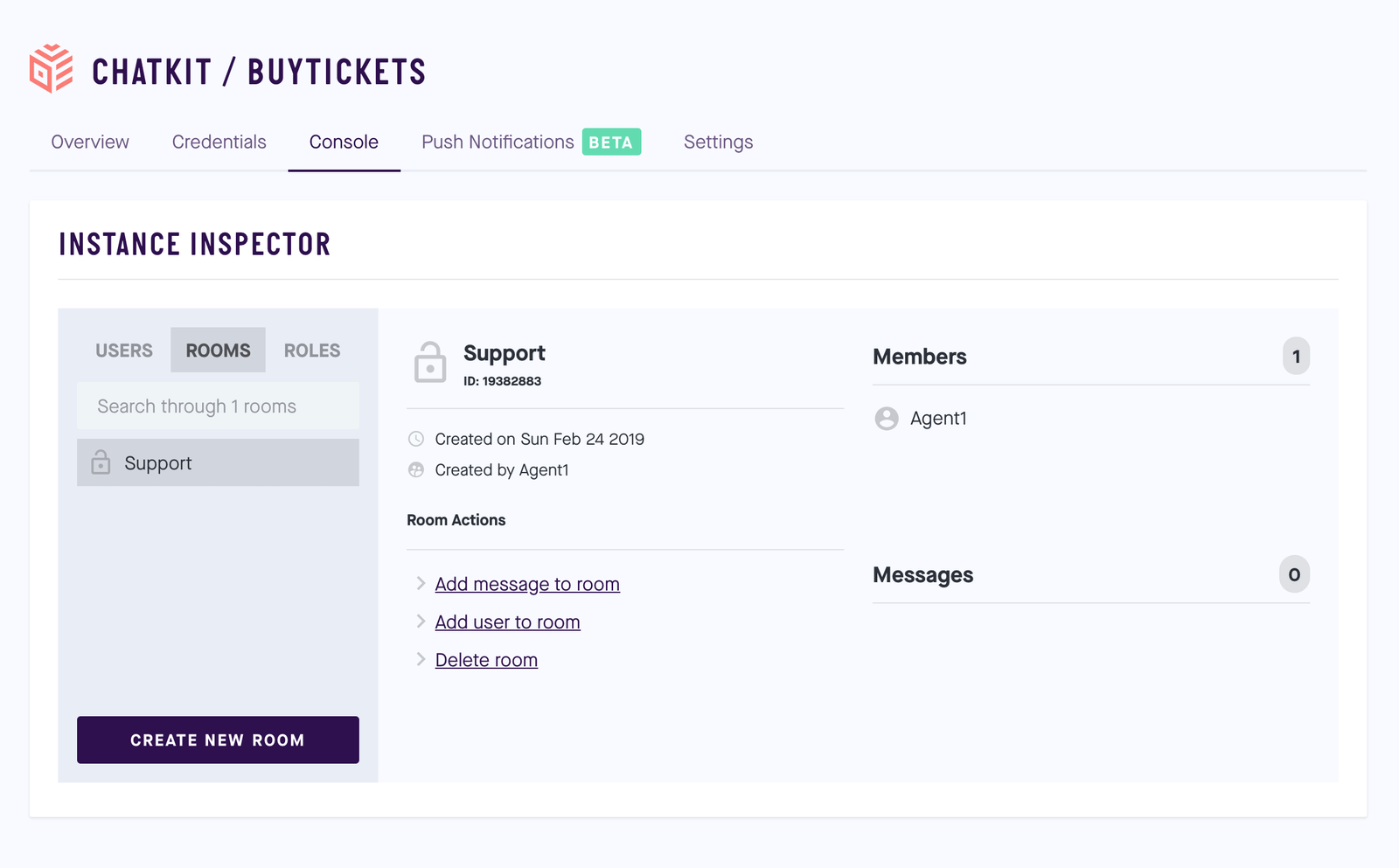 To actually create an application flow where we would to have user’s registration, we would need to have a backend. This means we would have a database where we would save the new users, and also the option to create them through API. For the purpose of this tutorial I am using only the Chatkit iOS SDK, so the workaround for mocking a login interface, was to actually save the created user’s ID in NSUserDefaults. This way we would be able to mock the login process and validate whether an existing user has tried to logged in. We will go more into details in the code below.

Chatkit use in our iOS application

Now let’s dive into the code. First open buytickets.xcworkspace and navigate to TicketDetailsViewController.swift

Now if we were to take a look at the interface builder we could see that the cells for the tableview are defined as prototype cells. The logic for hiding and showing the dedicated tableview and animating them is handled in TicketDetailsViewController.swift. 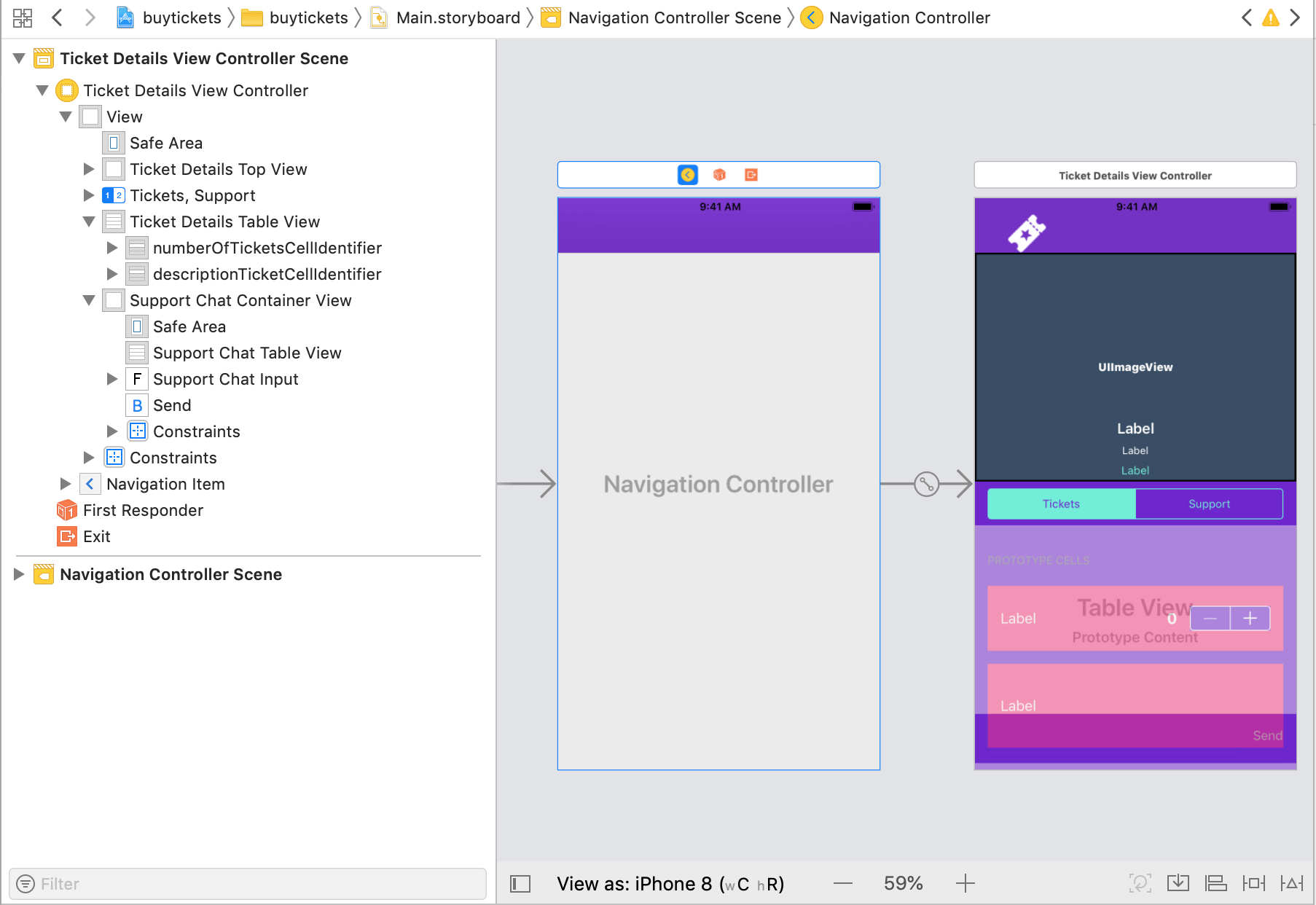 After getting basic overview of the UI setup, let us dive more into the code. The first screen the user will see is the Login screen.

The logic behind this one is fairly simple. It was mentioned above that we will save the user credentials in NSUserDefaults, and this is done on func application(_ application: UIApplication, didFinishLaunchingWithOptions launchOptions: [UIApplication.LaunchOptionsKey: Any]?) -> Bool { method, found in AppDelegate.swift.

In StorageAccess.swift for the purpose of this demo we manually save the agent and customer users ID, if not already saved. This way when the user tries to logs in, we can check if the entered username is presented in NSUserDefaults, if it is we log in the user, otherwise we show error alert.

In the main view controller, TicketDetailsViewController.swift, we define the constants and variables we will need for creating the instance of the ChatManager.

You can notice that the constants defined above are the ones that can be found in the Chatkit SDK console of the created instance. For the purpose of this tutorial test token provider was used. Otherwise for production environment, in order to generate your token you should use the secret key listed under CREDENTIALS. 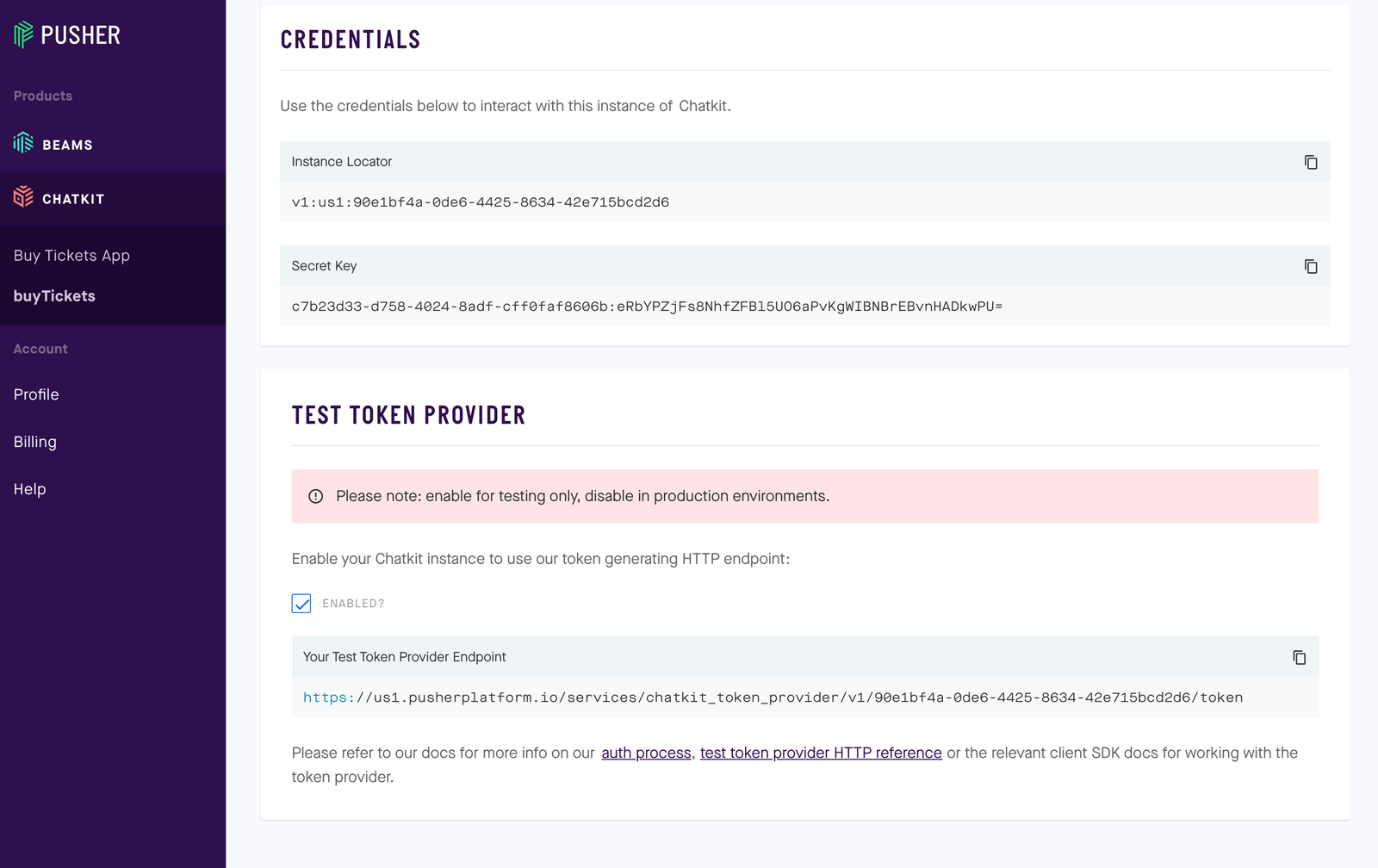 The first step would be to load the initial data, setup the tableview’s delegates, initialize the UI elements, register for notifications and setup the chat manager instance. This is done in the viewDidLoad() method.

The reason we register for keyboard notifications and save the default frame is for performing the expand and compress animation on the support chat screen. Can be observed in the demo above.

This is the complete code section for setup of chat manager, but below we will go step by step into the code.

We will go step by step from the above code section. First we initialize chatManager instance, using the constants defined above and the usernameCredential fetched at login.

From PCChatManagerDelegate we implement onUserStartedTyping and onUserStoppedTyping, so we can show the typing indicator on the support chat. For this purpose we implement the protocol ChatManagerTypingDelegate in TicketDetailsViewController.swift.

You will notice that the support chat has a textField and a send button. Whenever we start typing in the textField an IBAction is fired, that can be found in TicketDetailsViewController.swift

And that is when the typing indicator is animated on the screen.

The following step after setting up of PCChatManagerDelegate is connecting the chatManager instance, by sending the delegate as argument.

In the response of the connect(delegate:) method we receive the currentUser for the specified usernameCredential. The next step is to check the currentUser rooms. There are two options for the user’s rooms. If we check for Agent1, user which is already subscribed to Support room, the program will return that the user has one room and we call the method subscribeUser.

In this method the currentUser is subscribed to the room, sending as arguments the room it wants to subscribe, the class that implements the PCRoomDelegate, which in this tutorial is TicketDetailsViewController.swift and the messageLimit, which indicates whether we will show the old messages of the room, when a new connection happens. In this case messageLimit: 0 indicates that previous messages will not be shown.

But if we were to check for Customer1, which is not subscribed to any rooms, the program would return that the number of rooms for the currentUser is zero, therefore we call the method getJoinableRooms. This will return all joinable rooms, but since in our console we created only one room, the Support room, the rooms object contains only that room. The next step is for Customer1 user to join that room, with the method call self.joinUser(to: rooms[0])

After this method finishes successfully and if we were to open the online console for the Support room, we would see that now there are two users subscribed for the room. Agent1 and Customer1. 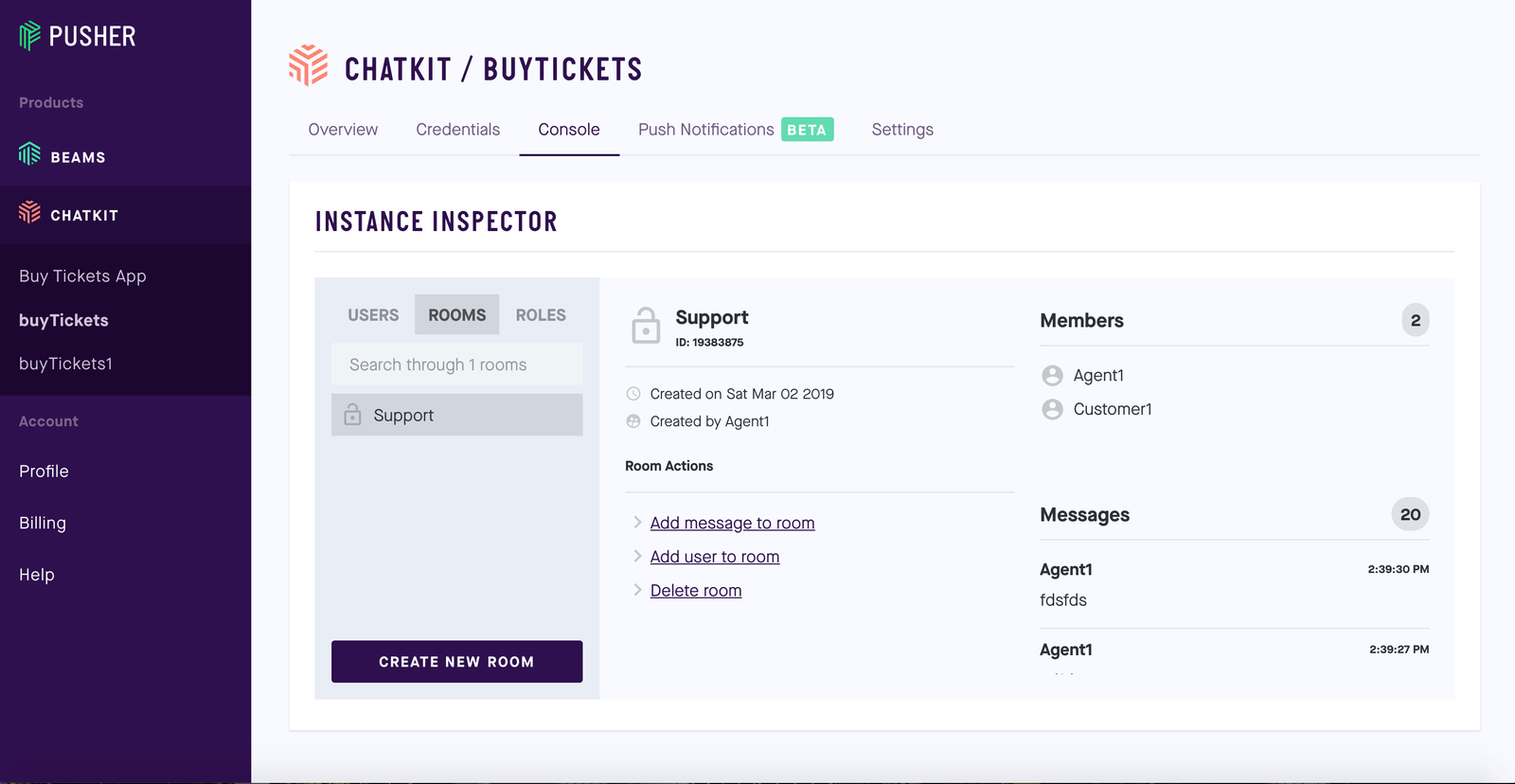 After we connected the manager, fetched the user and subscribed to the room, let us see the process of sending and handling a message. The next IBAction is the one that the send button triggers.

This method initiate sendMessage for the currentUser, sending the user’s room and text message as an arguments. Finally we reset the textField’s text.

It is really important that we would do this on main queue, since we are going to update the UI.

The place were the UI of the support chat is being set up and updated is the SupportChatTableViewDelegate.swift , so let’s take a look at it.

This class if implementing tableview methods and defining its UI. It is a simple implementation, drawing tableView with number of rows corresponding the messages sent. Then using UITableViewCell with only one label, so to present the sent message.

In the tableView(_ tableView: UITableView, cellForRowAt indexPath: IndexPath) method, you can notice that the flag received is used for the content alignment of the message info, so we can achieve the visual clarity in the support chat. Another thing is using UITableView.automaticDimension, so we wouldn’t need to limit the message size.

The final step is seeing how all of this would look like when we create two instances of users and Chatkit. Let’s observe the outcome of this implementation.

Hope you enjoyed my tutorial. The whole code can be downloaded on the following GitHub. You should have a better overview of using the Chatkit iOS SDK and understanding one of its many use cases. The above application code can be easily extended for your e - commerce application. Also you can read the rest of the Chatkit documentation for the iOS SDK and implement more of the functionalities it offers, besides the above presented ones.